the new solo record from

Name someone who has worked with thousands of artists including international jazz legends, contemporary pop stars, hip hop pioneers and both classic and modern rock greats.  Did they also lead Dirty Face, Albany NY’s beloved power pop power trio?  Founded and ran indie label Paint Chip Records? Produced and nurtured regional talents to help become national recording acts?  Just to be sure we are on the same page, did they also work with a First Lady and a NYC Mayor?  Only Dominick Campana has done all that, and more.

Back Pocket is Dominick’s long-awaited solo debut album.  Written, preformed, produced, and engineered by Dominick – save for choice guest appearances from Jorja Chalmers (Bryan Ferry) on alto sax, Graham Tichy on steel guitar, and Mike Kelley on some keyboards – Back Pocket has deep grounding in Dominick’s early punk and alternative foundations, while still touching new high points, both dynamic and subtle.  The album reflects rich experience, both in its musical and thematic capture of decades of records, loves, gigs, and fights, all in sterling production that reveals more with each listen.

But what matters are the songs.  The opening “Still Here” is a both churning and lilting take on love almost lost, lifted by a weaving saxophone solo from Jorja Chalmers.  “Enzo” sounds like a lost Talk Talk song, hiding a neighborhood mystery behind a melodic ride driven in alternative measures by bass and dancing guitars.  “Here it Comes” seemingly taunts the listener into counting the classic pop references, from Herman’s Hermits to Paul Simon to handclaps from every song you love.  Everyone can find some portion of their past in the reflective “Cowboy Chords,” which glides out on a shimmering guitar motif which fades before you want to let it go.  “Today” is a reminder that lust for life also happens in the everyday, although it features a guitar solo as far from everyday as you can get, something that James Honeyman-Scott would have deemed a keeper.  You won’t be faulted for thinking of Randy Newman during “Will Not Change,” a song capturing the good and bad of having conviction.  “Until I Die” is a cowboy-worthy honest pledge of love and loyalty.  Featuring a slinky reggae groove, “Window” is a wistful look back on mistakes that confronts the truth that “All your dreams and your plans like your favorite bands broke up long ago.”  “Youthful Offender” sounds like it came from a lost Clash soundtrack score, an aching instrumental that says a lot.  Fans of Dominick’s early Dirty Face work will fondly remember “Carousel,” remade here with the help of Jorja Chalmers atmospheric sax and a confident leanness that reaches back to but lands far beyond the original’s reach.

Back Pocket is literally the sound of not giving up, it is the sound of possibilities.  It embraces mistakes, every day and extraordinary, and makes the choice to move on, one day, one song, one measure at a time.  It’s a fearless record. 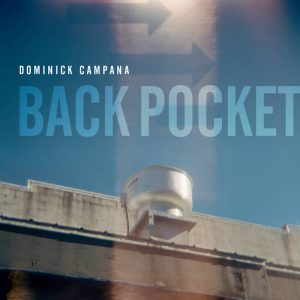